A Story About Laptops

A story about laptops and a very sad apple.

A story about laptops and a very sad apple. 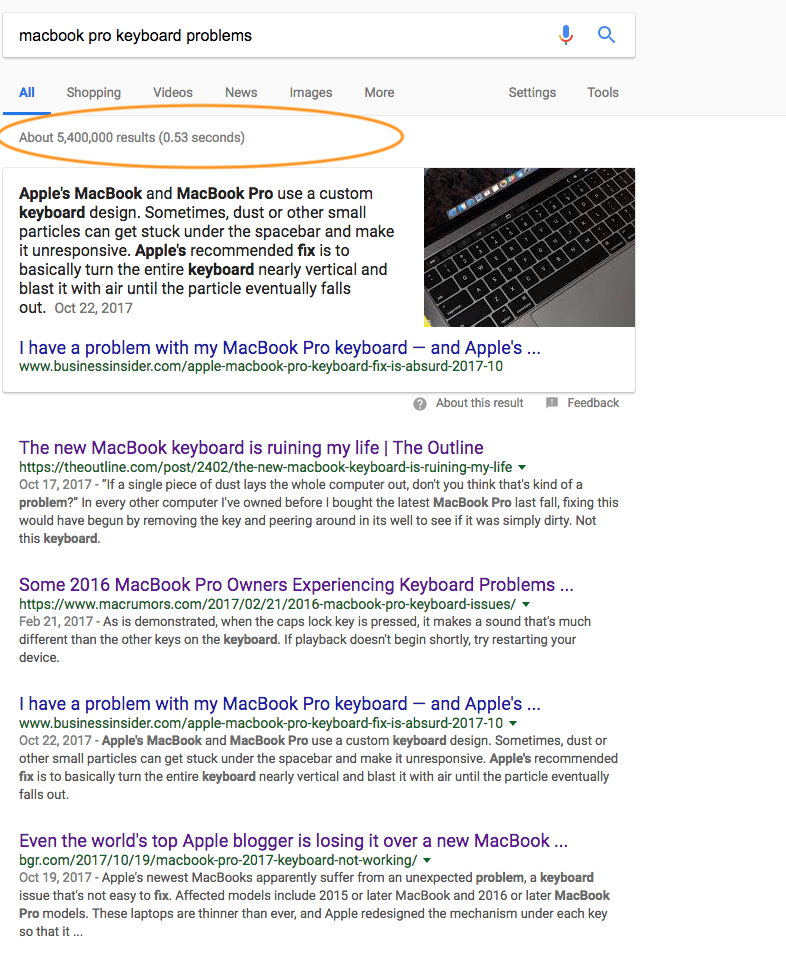 I’ve been hemming and hawing for a few months on whether I want to go full Linux on my home computer, which I have done before, running many variants of Red Hat since the original (non EL) 5.x Fedora, Ubuntu, slackware, CentOS/RHEL, Gentoo and even a Red Hat variant on an Alpha chip on the miata workstation. Suffice it to say, I’m not shy of running things entirely on linux. However, the Mac has long for me been a great mix of useable UNIX™ and useable human os. There is a long history of compatibility challenges for Linux users with different software we use on a daily basis. (msoffice, skype, exchange, webex, vpn clients, photography software, etc)

Primarily because of the photography software, I’ve run an apple laptop at home as well as Linux (also at work, but that is a different story) since the powerbook G4 days. They have always been amazing machines. Until this last one.

This latest iteration of the MacBook Pro is still an amazing machine. It is insanely thin. The PRO is thinner than my Macbook AIR. Like the macs before, it eschews tech that is dead but we haven’t realized, or come to terms with it yet. Apple was one of the first to toss out floppy disks, CD/DVD drives, go all usb/Firewire, They had one of the first all-in-one computers, (imac, powercubes). This time they forced us to go usb-c. I don’t mind this too much, as I think it is the way forward. power, usb, thunderbolt in one cable. and despite the need to carry around a bouquet of dongles, and a some minor security concerns

Build info coming this month. Still working out some things. These cables work on just about any device with a USB port (Mac/Win/Linux, phones too) pic.twitter.com/b6254FvpLY

Keyboards to many, especially in a role like mine, are shall we say, are a little divisive. No matter what keyboard you like, and there are many, one feature we all agree should be good is that when a key is pressed, it should register that keypress. This keyboard does not do that. 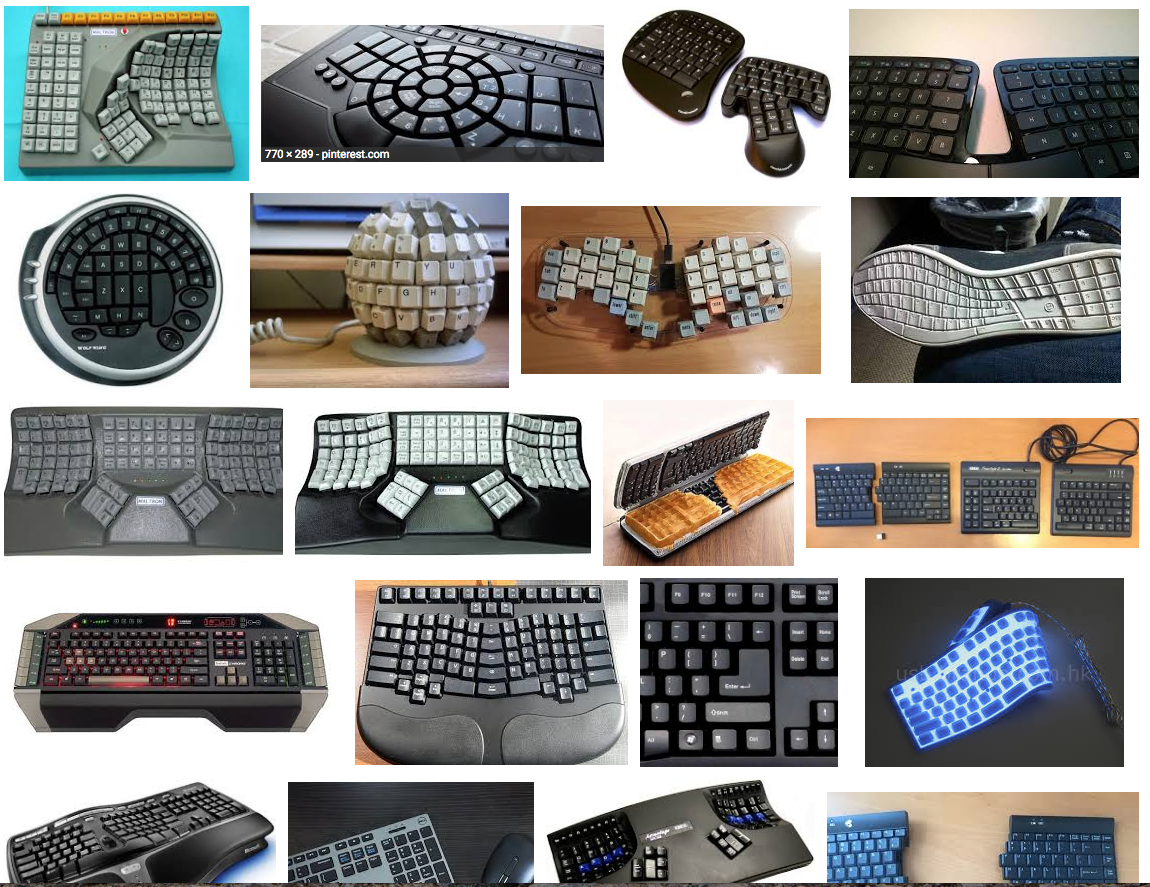 My work recently sent me one of these new mbp to replace the aging 2014 model. I locked my selfout of the laptop within 10 minutes of opening it, due to

After that incident, I was convinced the new keyboard was not for me. I clicked buy on a the first non Apple laptop I purchased in 14 years.

The search for a better butter knife

I did a little research and narrowed down my choices to three laptops. My requirements were simple.

Now the fedora people mostly run Lenovos. I have had luck in the past with these, but the X1 was the only laptop that came close, and it didn’t have the gen8 cpu or a hi enough dpi. so I had to scratch off the With the Lenovo off the list, we had 3 contenders left. Let’s review our choices.

This is a cool machine. One of the few that are thin, and can have up to 32GB of memory. The online order form suggest these are user serviceable. Almost fully loaded it was 1900 USD, which is a great deal. It comes from a company here in Denver that not only focuses on selling only Linux based hardware, they are developing their own OS. (pop os). The bad things here are

This is a long known platform. Dell has been selling this for years, and I’ve heard great things about them. I have played with the keybaord. it feels good. The bad things are

This one comes with Windows, but is a very sleek machine. It’s thin, comes with latest cpu and chipsets, and has a neat rainbow keyboard. Razer CEO has said in the past they want to be a Linux laptop for many,

but some feel it was mere lip-service There are some other questionable moves that give me pause.

So Which one to get? I turned to the collective.

About to buy a laptop to run @fedora. Need crowd sourced opinions, especially if you've owned one.

With Dell the clear winner, despite few votes, I set off to the Dell website. After some sadness from the massive gut-punch that is the lack of availability for the white/rose gold on the new XPS Dev Edition, (must be the drivers for the white plastic) I chatted with the helpful folks at Dell. They apologized for this terrible slight with a nice discount, and assured me that the white plastic does not have windows only driver requirements, which is a relief. 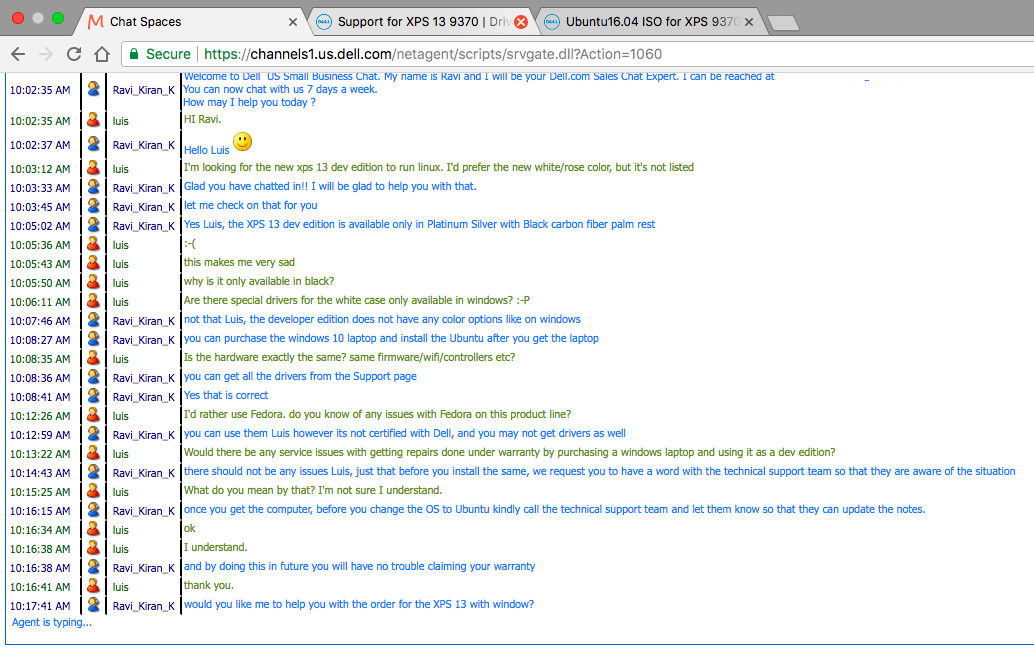 I’ll write a bit about getting from a base Ubuntu XPS 13 to a Fedora laptop suitable for my day to day.