In the news there have been quite a few reports of this divisive issue. People from all walks of life are rising up in outrage. There have been large protests in the streets, blocking traffic, with swaths of angry people, yelling at the other side. It seems we are divided more deeply, and further than ever on this red hot topic. Every day that passes it seems that peace and unity are further and further away. I am, of course, speaking of the LIMEBIKE electric scooter share program.

If you don’t know what I am going on about, allow me to give a brief explanation. Several silicon valley startups have embarked on a sort of ride sharing program similar to what many cities have with bike share programs. These bike(and scooter) share programs aim to solve the problem of owning a bike and the troubles it comes with, suchjeas maintenance, parking/security and share the costs among a group of users. You ‘rent’ a bike (or scooter) and pay for the minutes used, then another rider can rent the same bike and pay for the minutes they use. These are wildly popular in major cities, including Denver, Houston NYC and many others. What’s the difference between these city run programs and the ones the valley has launched? The pick up point.

In most of the city run programs there are bike racks with a kiosk attached. You pay at the kiosk, “unlock” the bike, and return the bike to any other of these stations across the city when you are done. The city places these kisoks/bike stations where they determine they are needed. Often they are near public squares and train stations/bus depots. 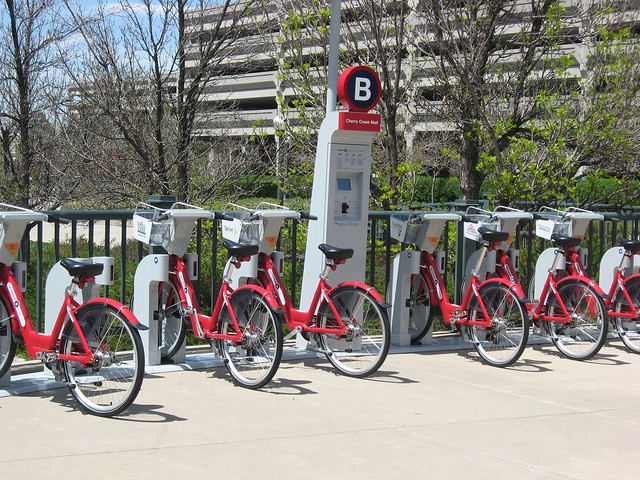 The SV startups programs replace the kiosk with a mobile app, (because of course.) and the bike station with wherever-the-fuck-you-feel-like-it. On the surface it seems like a great idea. You, as a rider, you look on the map and find a bike/scooter near you. Maybe you are lucky enough that someone dropped one off in front of your apartment. Maybe you timed it just right as someone drops one off in front of the super market that you are leaving. This idea of parking wherever you finish your ride depends on people being considerate, and parking the bikes out of the way as not to impede non-users. News flash: people are not at all considerate.

This minor point, where to leave and pick up a shared bike/scooter has people very angry and confused about how to use them.

People will park them anywhere…

There are tons of posts on reddit about these services.

The infestation is spreading - first limes, now birds from r/Denver

Despite all this, I, your humble and brave servant, have tried this scary sccoter share system out myself, so you don’t have to brave the scary world yourself.

A few weeks ago in San Francisco I failed miserably to find a functional scooter. The app shows scooters where they aren’t, and when you find one in the wild, it is depleted, out of service or in use/locked. As I returned from SF, feeling deeply defeated that I never got to try out the LIMEBIKE scooter, LIMEBIKE launched in Denver.

The search for a scooter:

You look on the app for a scooter near you. The app shows locations of scooters with their chargelevels overlaid on google maps. In SF I found that scooters were not anywhere near where the app said they were. I thought this may be due to the trouble GPS has at times in downtown areas. However, even here in Denver, with its shorter buildings and more accurate gps (no building to block signals) they are a bit off.

Take a look at the map photo vs reality. 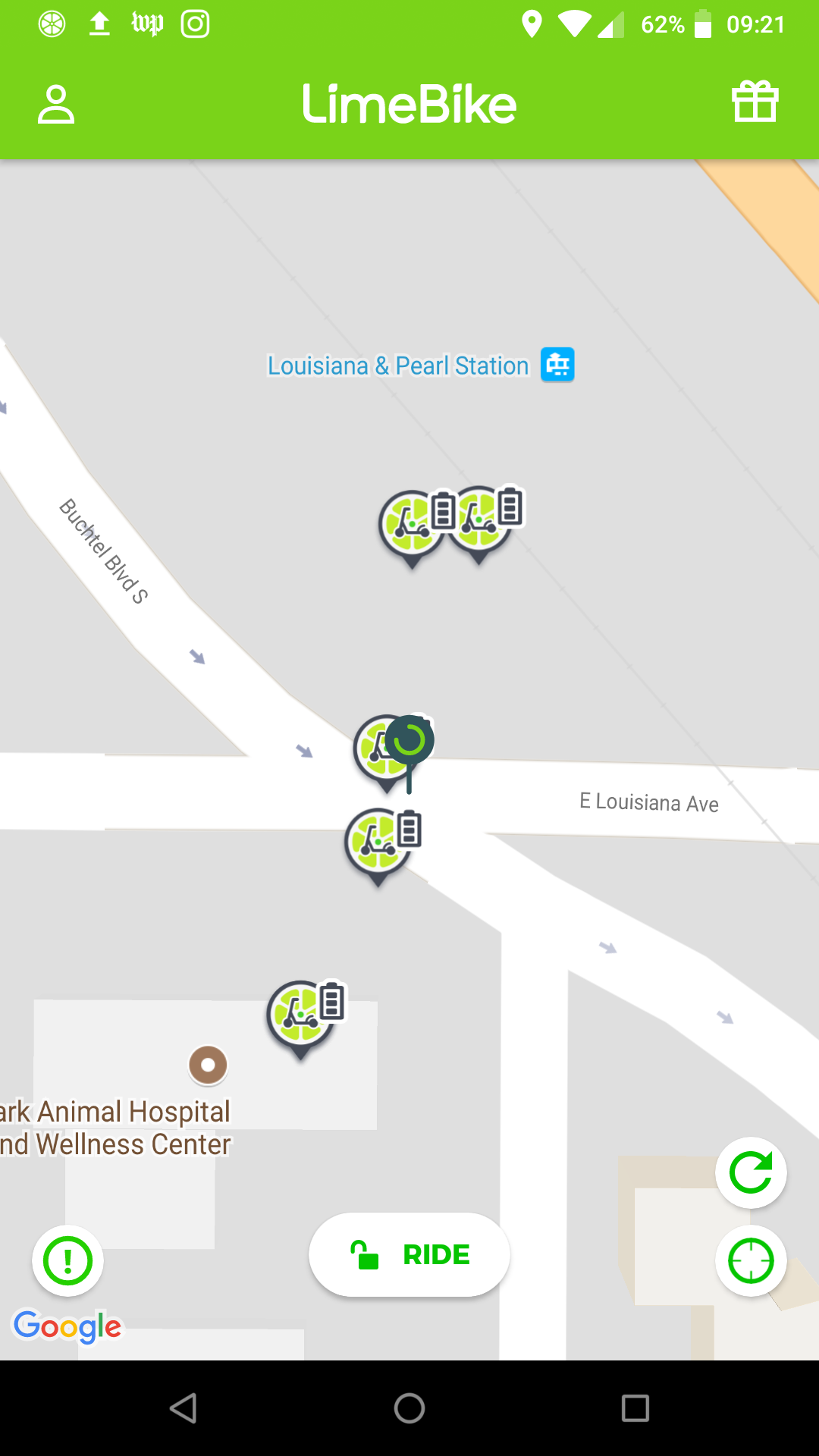 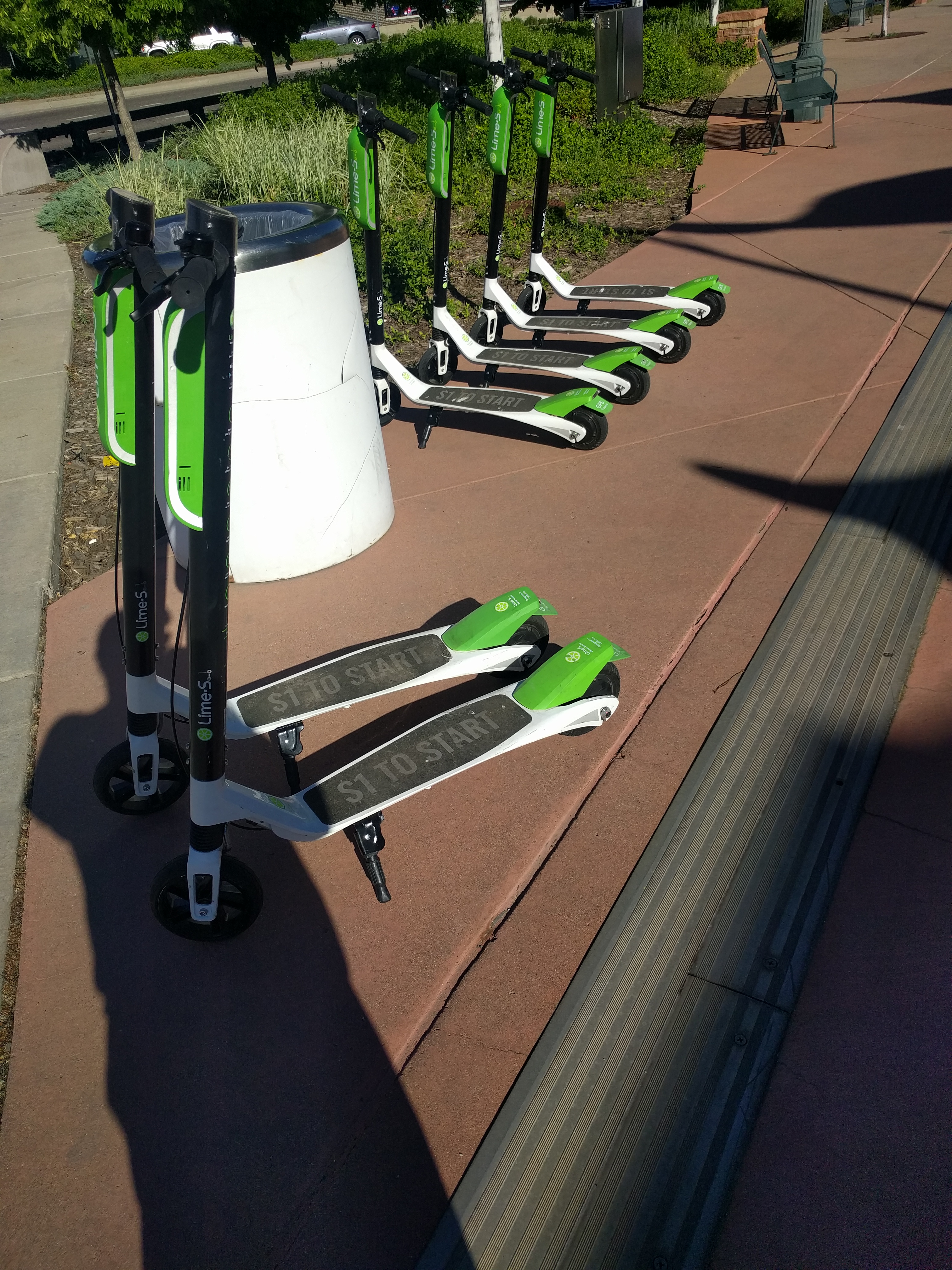 You ride the scooter like any push scooter. The scooter is equipped with a hand brake on the left, and an thumb lever on the right for the accelerator. You must kick push the scooter to get it rolling before the electric motor will engage. I think this is a safety feature to not accidently hit the accelerator from a standing position and have your scooter ZOOM out into traffic. In the center of the handlebars is a LCD readout that shows your speed, and battery level. The scooter itself is comfortable enough, although the handlebars are the narrow hipster-fixie width. This, coupled with the smallish hard 8” wheels gave the scooter an erratic twitchy feel. This took a few minutes to get used to. The scooter is powerful enough, getting up to 17mph even with my heavy frame, although it struggled a bit to get up a hill, slowing down to 8mph.

I rode around the hood for about 30 minutes, getting curious looks, a few smiles and a few grimaces along the way. One nice man was kind enough to tell me from his van that “You’ll get a ticket for riding those on the street, I’m just telling you…” This (false?) belief is a source of confusion for many. Being that I’m used to being told (read: screamed from a YUKON XL AWD in pearl white with those stupid family stick figure stickers on the back by some angry person named Sheila sucking down her 4th venti sugarfree iced vanilla latte of the day… I GET YOU ARE ANGRY SHEILA, BUT IT’S NOT AT ME OR MY BIKE! FOCUS ON WHAT IS REALLY BOTHERING YOU AND DON’T LASH OUT AT STRANGERS ON A BICYCLE) that bicycles BELONG ON THE SIDEWALK ASSHOLE! I didn’t pay this advice any mind, and nothing happened.

The total charge for my 27 minutes of wheeee! Was 4.20 after a discount of a buck. If the companies can sort out how to manage people putting the scooters where ever they want, and work with the city on the regulations, this could be a great last mile solution. This could encourage and drive up public transport usage. Or it could end in a dumpster fire. ¯\_(ツ)_/¯

Officially the most #SanFrancisco protest ever pic.twitter.com/2hyjls2ZHL

Only time will tell. Will I use one again? Probably.