A few good days and a new toy

I missed a few days. My team at work and I were working pretty late into the night at the remote datacenter on this mega waterfall. (that’s not the way we should work and we know it…)

I missed a few days. My team at work and I were working pretty late into the night at the remote datacenter on this mega waterfall. (that’s not the way we should work and we know it…)

We worked hard, and long hours, and we accomplished a lot. I’m proud to be part of this team.

So I missed a few days posting here. I’m sorry about that. I’m back home now, and I took Friday off.

Highlights of the day:

What is the new toy? A FujiFilm x100F. It’s an amazing camera that lets the photographer phocus on the phun of creating photos. (see wut i did ther..)

I have been shooting a full frame for a while. I upgraded to the Canon 5Dmkiii when it came out from a 40D. It was a huge upgrade for me. That was in 2012. A few years back, I noticed that i was preferring my 13 year old plastic 50mm 1.8 lens over the “L” lenses that I have. I love the intimacy of the the lens. I love the honesty and purity of the act of capturing a photo with that lens. However, I also noticed for the life as we live them candid portraits, it was awkward carrying around and attempting to capture the people in a relaxed manner. They were often hyper aware that this camera “takes good photos!” and were intimidated by it’s presence. People are more comfortable when they don’t think they are the « subject » of « photography ». I believe this is why the Leica family is so beloved by street photogs. They are un-inmidating to the untrained eye. The iphone today is the kodak disk of the 80s. It is a incredible tool. H.O.W.E.V.E.R….

Let’s take a look at two photos. One taken with a mobile phone, one with the 5dmkiii + 50mm ‘plastic fantastic’

This is Mario. You should hug him next time you see him and ask him about the last book he read. #jerseyboys #taylorhameggandcheese

This is Mario. This was taken with the Nexus 5x mobile phone. To get the soft light, I had to pull him closer to the large window behind me. Due to physics, the subject Mario is in phocus (there I go again..) but so is the background. Due to the size of the sensor, the distance between the front lens and the sensor, (very very close in a mobile phone) the depth of field cannot be easily made very shallow, which is a very pleasing look.

Now let’s look at a photo taken with a very cheap lens on a full frame camera.

This is Matt. He and his brother own the coffee shop in the photos above. I captured this photo on a different day, but about the same time of day. (during my coffee outing routine) Matt was behind the coffee bar a good 15 feet away from the large window where Mario stood. Look at his eyes. They are in phocus and were the attention is drawn. The phocus then falls off fast to the background which is blurry. This is DOF, or sometimes called BOKEH!

So the challenge for me was being able to capture these sorts of candid ‘portraits’ without having to carry around a beast of a camera.

Why not a Leica you ask?

So in the photo hobby and pro world people have been going bonkers over what FujiFilm has been doing. They are making these ‘rangefinder’ style cameras very much in the spirit of the old Leicas that are light, unintrusive and produce incredible quality photos. All this for a tiny fraction of what the incredibly desirable Leica costs. It has a fixed lens. That means no camera zoom. If you want to fill the frame you use the patented Nike zoom method and walk up to the subject. I LOVE THIS!

Here is a side by side of the two cameras. 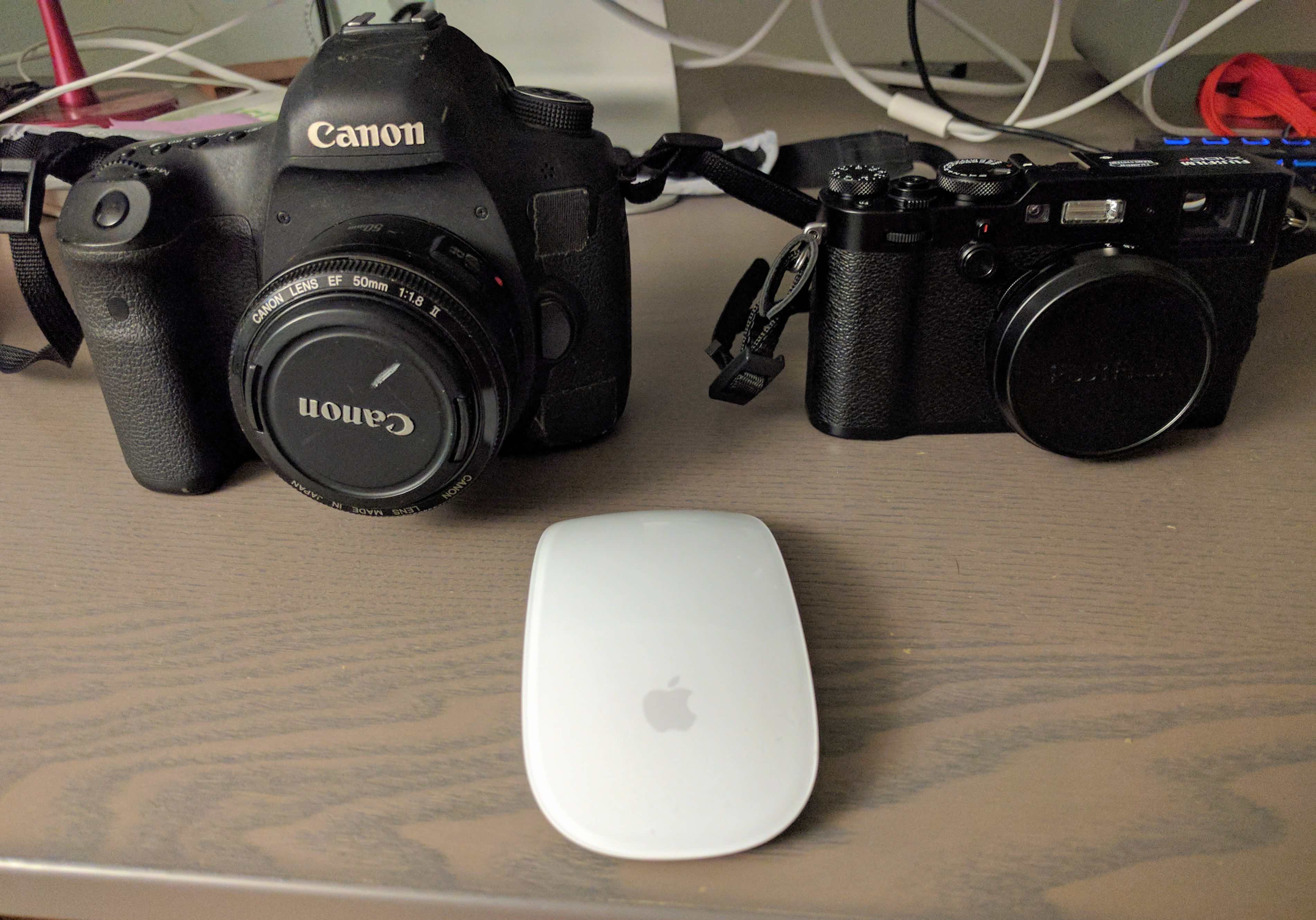 I will be shooting more now as this camera is light and small enough to carry around often, and hopefully I will create some great stories to share with you and the instagram (link at bottom of page)

here is the first frame as I was unboxing and reading the manual. There’s more to come.